This certainly doesn’t cover everything we would need to consider but it does give us a starting point. We’re going to start by modelling his head, neck and body from a single cylinder.

The next question to ask is how many sides this cylinder will require? This is important because the extrusion of arms and legs may not work well if we select an inappropriate number to start with. Since the arms and legs are protruding from the left and right, the smallest number of sides this character can be modelled from is four, but since we want more control on the curvature of his torso and head, six sides is probably a more appropriate number.

So, let’s add a six-sided cylinder mesh to our workspace, if you’ve forgotten or are unfamiliar with the steps required to add and manipulate a mesh, here are the steps you’ll need to follow:

Be sure not to skew his Z-axis in the front view! Since we’re going to use a mirror modifier later down the track, having a perfectly upright character from the front will be important…even if this means the vertices don’t sit quite where we’d like, it will be beneficial in the long run: 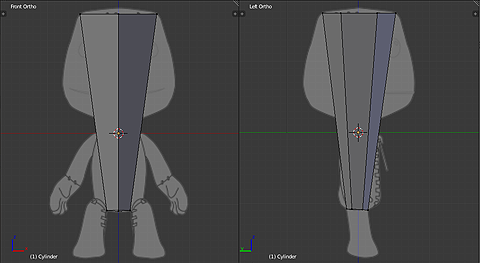 Notice that the bottom vertices line up where his leg would begin extrusion and that I’ve rotated the bottom face on the X-axis so that it mimics Sackboy’s lordosis…you don’t have to add this rotation if you don’t want to, but making a mesh your own is an important part of the 3D modelling process so do make sure to add your own flare along the way.