So now that we’ve programmed our “Card” class, let’s think further about what other real-life objects within BlackJack could be mapped into programmatic ones. The “Card” class was a fairly obvious one and hopefully it has served as a clue to the next class we need, the “Deck“…

It may not be a single object in a “real-life” sense but you can hopefully see that a deck represents a single entity in the game of blackjack. Once you start to imagine what a deck contains and what you can do with a deck, it will probably stand out as an object more clearly:

Fields/States
So what fields or pieces of information are required for a deck, think logically about what makes up a deck and hopefully you will come up with a similar list to this:

And there you have the fields needed in our “Deck” class!

Methods/Behaviours
So what can you do with a deck of cards? Well again, thinking logically, you should be able to come up with a list much like mine:

And so without any code whatsoever we’ve come up with the skeleton of our “Deck” class. Using yUML again here’s a visual representation of this new class: 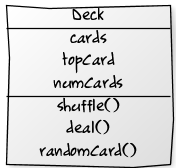 Okay, so the planning is done, let’s go and make this bad boy!